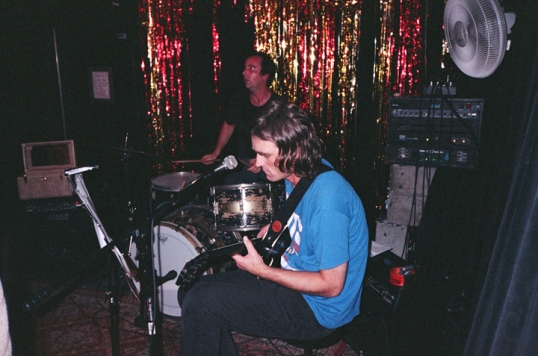 “So there I am enjoying another Naragansett on like a Tuesday night at the Low Beat, and all the cool kids show up to ruin it.” claims old coot DJ Think Noise. “And I mean all the cool kids. There was at least one member of every hipster indie band I hate there; the Che Guevara T-Shirts, the Black Ships, the Hill Haints, the Bare Mattresses, even the old Complicated Shirts! And I think to myself, what the fuck? Is some dude from Pearl Jam playin or some shit?”

DJ Think Noise’s ignorance of indie rock is no excuse for us to fail to report objectively as we always do. A dude from Pearl Jam it was not. It was Neil Haggerty’s new band, who every media outlet that announced the show was obliged mention  (for those of you that weren’t cool enough to already know) was formerly in seminal bands Pussy Galore and Royal Trux. Have you ever heard of them? Neither had we. I guess we’re not as cool as all the bands we make fun of.

“So this dude from Nirvana starts playin this song and I’m like, ah hell this ain’t so bad. Then he starts soloing and he just don’t stop. And the other guy in the band just starts soloing too. And if that ain’t bad enough, I look over and realize he’s whipped it out! His hands are on his guitar and his free willy, and no one seems to care! Then this asshole keeps it up, just noodlin and jerkin and staring dead-eyed ahead and sayin ‘we da howlin hex!’. What a bunch of bullshit. Meantime all the cool kids are eatin it up cause he used to be in Third Eye Blind or whatever. Fuckin circle jerk tone deaf old hipster assholes.”