As part of our ongoing series with our own correspondent DJ THINK NOISE, this week’s issue explores how we knew about Super Dark before it was cool. 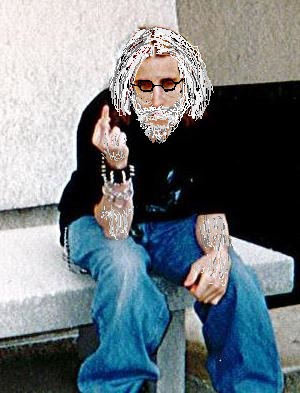 “I tell you that Metroland (sic) don’t know about anything cool until it’s all over the papers!  We wrote articles about Shane and Chris the Super Dark fudgey brownies long before they was doing all this music and booking hoo-ha and were just trying to make their own little Brown Cuts Neighbors records!”

“First there was the 51 3rd, than your NFI, than your Benson collective, and now we got this.  But it ain’t nothin new to old THINK NOISE.  I been spinnin and punkin and spittin on posers like Metroland [sic] since before they was an Alt, and I’ll be here when they gone.”

“They still don’t say shit about the real shit round here, the HILL HAINTS and the MOON WORSHIP and the CANDY AMBULANCE and the goddamned super fuckin great BURNT HILLS, so they don’t know shit and they still ain’t cool!  Sayin they good buddies with the Super Dark doan fool old THINK NOISE and it ain’t never gonna.  The Super Dark super underground always gonna be too cool to put in real print, and they can say they know but they don’t know shit bout shit!  Back in the 90’s when the alternative started we’d just shake our heads an say ‘alternative to what?’ Goddamn posers movin in making money on our punk scene…”

He went on to ramble for another twenty minutes or so before passing out drunk on Lark Street around 10AM, but he (as usual) just repeated what he’d said above using a couple different phrases and sentences and continuously blurring the lines between the old Metroland, the Alt, the Benson collective, the Super Dark collective, and some old shit no one’s heard of or mentioned in decades like Flipped Out, Noreaster Failed Industries, No More Labels, Hoex records, etc…  Even we’re not old school cool enough to know what the fuck he was talking about.

In all seriousness the rest of the staff here at Times Boredom is overjoyed to see a real paper doing a cover story about the Super Dark Collective, and we only hope this will spark even more media coverage of the great works they do and the local bands they’ve helped bring attention and gigs to over the past few years.  Congrats Super fudgey Dark brownies and more tastey success in Saratoga and elsewhere!